Content by Economist, Will Dunning
Other Report
Wednesday, May 28, 2014

Let me start by saying how pleased I am to be writing this.  I have been analyzing housing markets since 1982. I love this work, and I am flattered that Landcor has invited me to contribute to its housing market research.

Now, I have to confess that I am not intimately acquainted with BC housing markets.   I live and work in Toronto, although I did live in Vancouver while I completed my Masters degree in Economics at UBC.  That was during 1979 to 1981, just as a housing bubble was bursting.  Is this timing a coincidence?  I hope not.

One of the great myths in economics is the “soft landing”: soft landings are often predicted, but I don’t think anybody has ever actually seen one.  On the other hand, we can find lots of “false sightings” of soft landings – the US housing market of 2007 is a prime example where what was expected to be an orderly slowdown turned into an economic catastrophe.

So – are we really seeing a soft landing in BC’s housing markets?  Maybe yes!

Landcor’s data shows that sales activity in BC peaked during 2005 and 2006.   Since then, the sales trend has fallen very sharply, by about 45% (in Figure 1 I have added seasonal-adjustment to the data, which makes it a bit easier to spot the trends).  According to this data, the sales trend (“Poly.”) has been stable for the past four years. 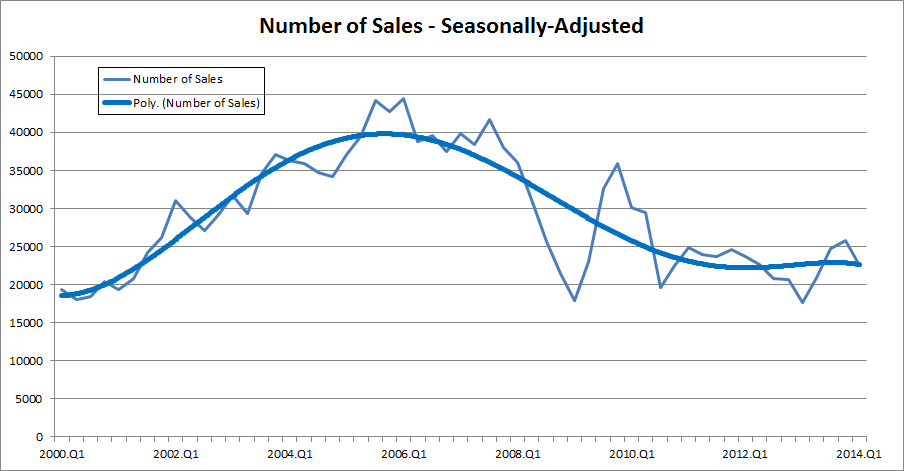 Another aspect of the market, which gets a lot of attention in the BC housing sector, is price growth.  Corresponding to the peak of sales activity, price growth was very rapid until the end of 2007 (see Figure 2).  Since then, the price data has been volatile. To be frank, it is very difficult to decide what is the “true” trend for house prices in BC.  But, we can reasonably say that the sharp drop in sales has not brought a collapse of prices, and we might say that, even in a weaker market, there has been a gradual upward trend for prices. 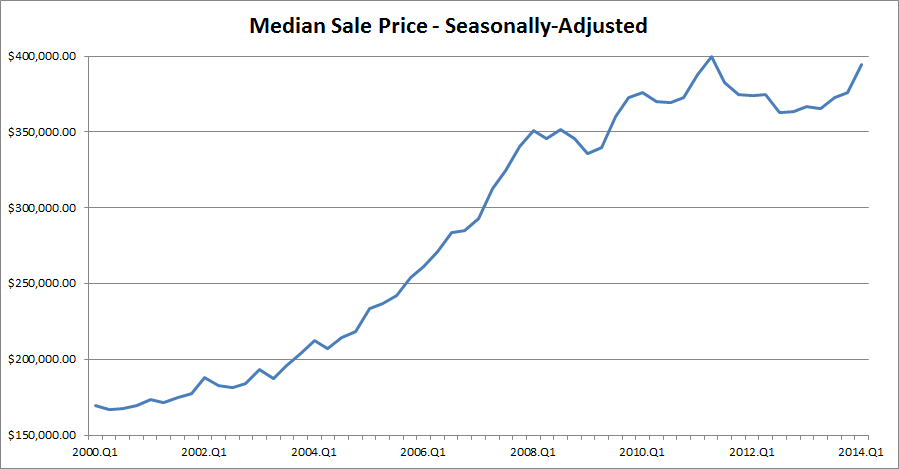 The word “bubble” gets used a lot in discussions about Canadian housing markets. I think the word is used too freely, in the sense that the discussion isn’t rigorous in defining what a bubble actually is.

For me, a key aspect of a “bubble” is that activity has become divorced from economic fundamentals.

If we can reasonably attribute housing activity to economic conditions, then we probably don’t have a bubble.

In the case of housing, the biggest economic fundamental is job creation, which gives people the ability to be active in the market.

The next chart (Figure 3) is complicated – sorry about that, but it has to be done.  It contrasts house sales in BC to the rate of job creation.  In this chart, I see a clear relationship – the trend in house sales looks to be quite closely related to the trend for job creation.  As job creation picked up in the early 2000s, house sales followed.  The peak in sales more-or-less corresponded to the peak in job creation.  More recently, a slowdown in job creation was followed by a slowdown in sales.  From this perspective, maybe BC did not have a “housing bubble”.  Maybe what it had was a strong cycle, based on a strong economy.  In that case, there wasn’t any bubble that was “inevitably” going to burst. 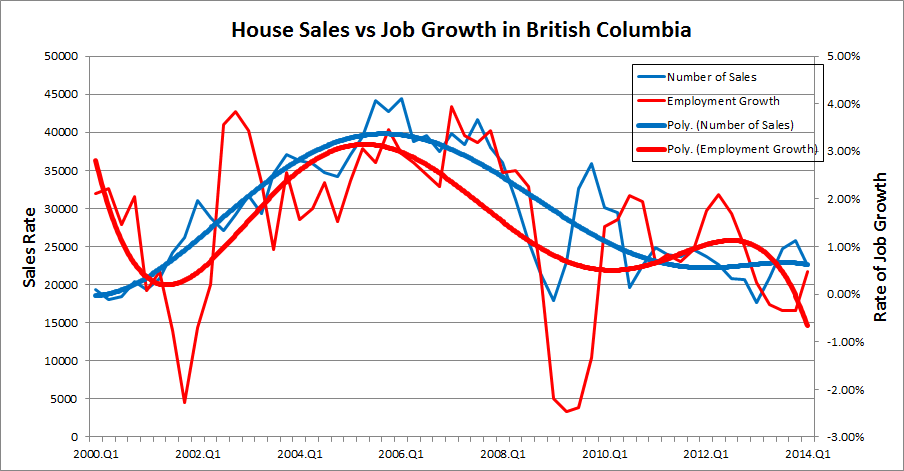